Overview of the EUR/USD pair. May 22. Donald Trump is predicted to suffer a major defeat in the 2020 election. The chances of re-election are extremely low due to an underestimated pandemic. 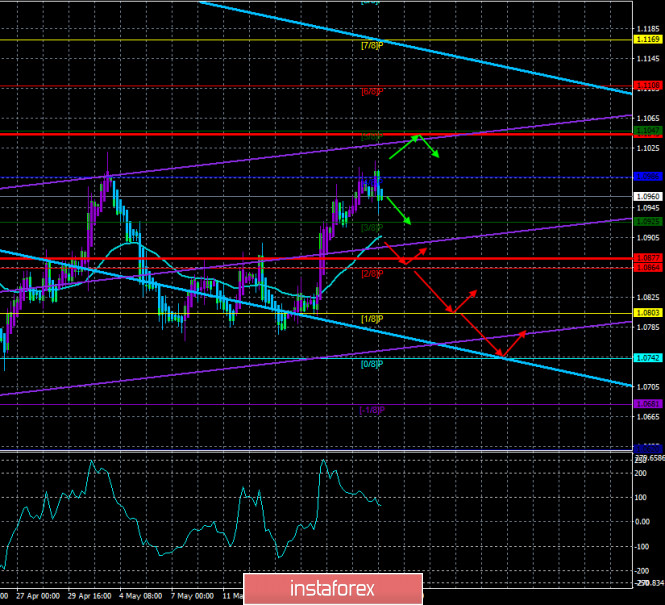 The EUR/USD currency pair finished the penultimate trading day of the week as we expected. Traders did not immediately start a downward movement, and finally worked out the area of the $ 1.10 level once again, which is still the area of the upper line of the side channel. Thus, having worked out the third resistance level on the Ichimoku indicator this week - 1.1008, the pair performed a downward turn and began a sharp and quite strong downward movement. Based on this, we assume that the bulls have exhausted their potential and now the quotes of the euro/dollar pair will rush down. According to the "linear regression channels" trading system, the situation is approximately the same. The pair worked out the Murray level of "4/8"-1.0986, which we also called more than once, and rebounded from it. Now it is expected to move down to the moving average line, overcome it, and move further to the level of 1.0750.

The macroeconomic background of the last day was quite interesting, but at the same time, most of the published statistics had almost no significance in the current situation. We have repeatedly said that traders do not pay attention to most of the reports, but trade each pair based on the general fundamental background (for example, it is negative for the British currency, which is under pressure) and based on technical factors. In the case of the EUR/USD pair, "technique" is in the first place. However, several interesting indicators were published yesterday, so let's look at them briefly. The day started with the publication of business activity indices in the German services and manufacturing sectors. We will not elaborate on the figures, but we will only say that business activity has started to recover compared to the previous month, but it is still minimal. In the European Union, the situation is approximately the same. The service sector showed an increase from 12 to 28.7 and the manufacturing sector – from 33.4 to 39.5. However, much more interest was aroused by the publication of applications for unemployment benefits in the United States. According to this report, the number of primary applications for the week of May 15 was 2.4 million, and the total number of secondary applications for May 8 was 25 million. These 25 million are considered the real number of Americans who have lost their jobs in recent months. A little later, data on business activity in the US were published, and here the picture is approximately the same as in Europe. Both areas showed improvement compared to April. Now let's analyze the movement of the currency pair during today's day. In the European trading session, when weak business activity indices were released, the euro was growing, and in the US, when the next failed unemployment report was released, the dollar was growing. From this we draw the same conclusion as before: market participants ignore macroeconomic statistics.

The fundamental background for the EUR/USD pair is more interesting. For example, yesterday the contents of the minutes of the last meeting of the Federal Reserve became known. According to this document, the Federal Reserve is considering additional opportunities to stimulate the economy and expects that the recovery will be long and unstable. The minutes also said that low rates will continue until the economy begins to show a confident and strong growth rate. It is also reported that members of the monetary committee of the Fed do not consider the possibility of negative rates, despite the fact that this option is supported by Donald Trump. Members of the FOMC are afraid of new waves of the epidemic, which can negatively affect economic activity and further slow down the recovery process. "The Committee may further clarify its intentions regarding its future monetary policy decisions at upcoming meetings," the minutes said. Thus, we see that the US Central Bank is setting itself up for a long recovery and understands that the situation with the "coronavirus" may escalate again at any moment.

Meanwhile, analysts at Oxford Economics provided their report and forecast of the results of future US elections. According to this analysis, which is conducted before every election, and has only shown the wrong result twice since 1948, Donald Trump will be defeated in the election in November. The forecast model uses data such as the country's unemployment rate, income, and inflation. According to this model of analysis, Donald Trump will get about 35% of the vote in November. Interestingly, the same analysis conducted before the crisis gave Trump 55% of the vote. The report also says that Trump's key trumps were leveled by the crisis. Economic growth, unemployment, and the labor market - this is what the current US President can no longer boast to voters. The report also says that seven states, which regularly fluctuate between Democrats and Republicans, are the most affected by unemployment and the economic downturn. We are talking about Iowa, Wisconsin, Missouri, North Carolina, Ohio, Pennsylvania, and Michigan. So these states are expected to vote for Joe Biden. In fact, other analysts have come to similar conclusions, including us.

Donald Trump is well aware that in the current conditions it will be extremely difficult for him to win and continues to pour mud on everyone who comes to hand. The speaker of the House of Representatives, the Democrats, personally Joe Biden, China are all to blame for what is happening in the United States. For example, Trump's latest tweets say that "China is guilty of mass murder around the world". It means that it was China that spread the "coronavirus" around the world, which has already led to more than 329 thousand deaths. In principle, the American President has no choice but to criticize and blame...

On the last trading day of the week, neither the United States nor the European Union has any reports or important news scheduled. This means that nothing should prevent traders from trading in accordance with the technical picture. Thus, we expect a downward movement on Friday, May 22. As a safety net, we recommend considering the option with a new upward movement not earlier than a confident overcoming of the 1.1008 level. 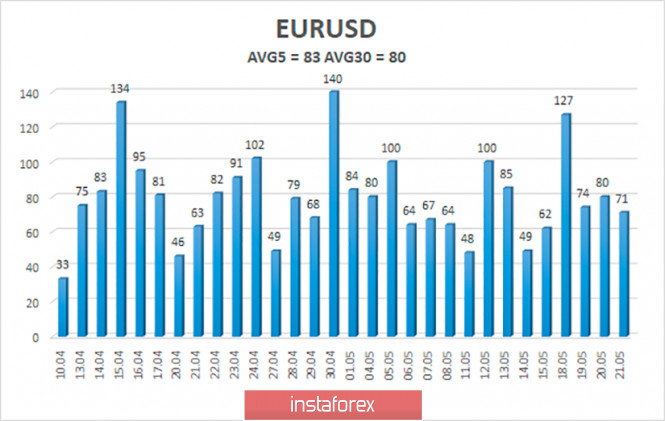 The average volatility of the euro/dollar currency pair as of May 22 is 83 points. Thus, the value of the indicator remains stable and is characterized as "average". Today, we expect quotes to move between the levels of 1.0877 and 1.1043. The upward turn of the Heiken Ashi indicator may signal a new attempt by traders to break out of the channel of 1.0750-1.0990 through its upper border.

The EUR/USD pair started a correction. The level of 1.1000 has already been worked out twice, so there is a high probability of the pair turning down and turning a downward movement within the side channel of 1.0750-1.0990. Thus, it is recommended to consider selling the pair with the goal of 1.0750. Buy orders are recommended to be considered only above the level of 1.1008 with targets of 1.1047 and 1.1108. For more confidence to sell the euros it will be possible after overcoming the resistance.

*The market analysis posted here is meant to increase your awareness, but not to give instructions to make a trade.

InstaForex analytical reviews will make you fully aware of market trends! Being an InstaForex client, you are provided with a large number of free services for efficient trading.

Our specialist
will call you back
in five minutes
We will navigate you
through the website and
answer all your questions!
Can't speak right now?
Ask your question in the chat.